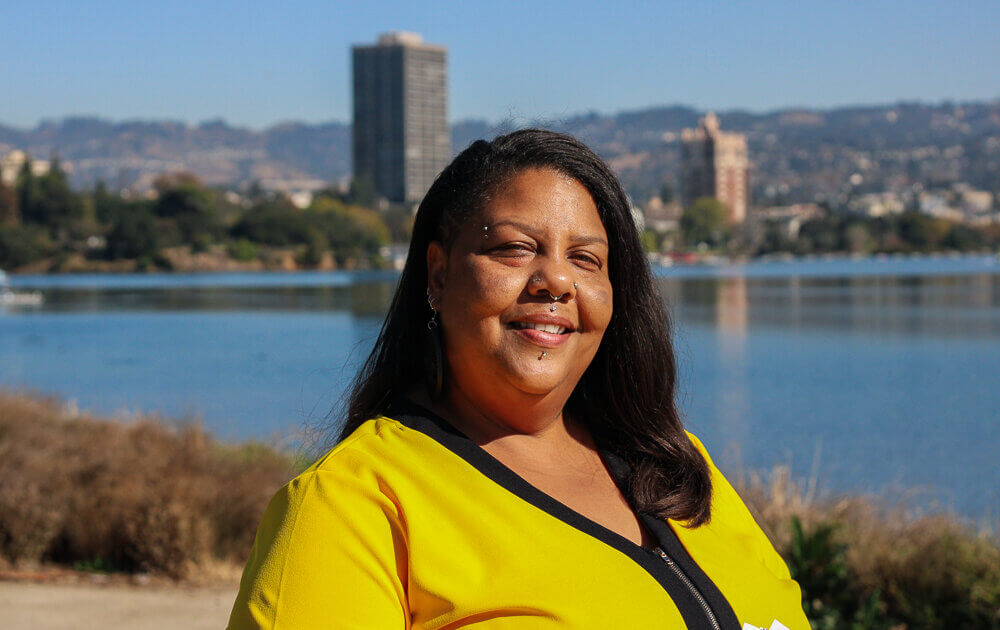 I Ran Because “I Felt I Had To”: An Interview with Esther Goolsby

Esther Goolsby ran for Alameda County Supervisor, District 4, in March 2020, a race which she lost to fifth-term incumbent Nate Miley. The district includes portions of Oakland and the communities of Ashland, Castro Valley, Cherryland, El Portal Ridge, Fairmont Terrace, Fairview, Hillcrest Knolls and Pleasanton. In September, Bay Rising Action’s Executive Director Kimi Lee interviewed Goolsby to speak to her experience running a vibrant campaign, and to look toward the future.

Goolsby is a passionate community organizer, and Bay Rising Action was excited to speak with her about the importance of grassroots candidates, challenging embedded representatives, and connecting with the community.

Kimi Lee: Thank you so much for agreeing to talk with Bay Rising Action about your run for office! Can you start off by sharing why you decided to run?

Esther Goolsby: So, I’m going to be really honest. It really came to me – in a dream, in my sleep, from what I know to be true, our ancestors. And throughout the campaign I basically came up with more reasons, right? Paying attention to the incumbent’s seat for at least the last two years, and all the positions he holds, it felt necessary. Then – a little bit on the personal side – last year in May I went to the hospital, and I know I almost died. And it felt more or less like… we don’t have time. The gift of being here, we should do all we can do. Once I learned how the systems work, why especially Black people, descendants of slavery, are always at the bottom, you know? So the reason why I ran is: I felt I had to.

KL: You ran a really big race against an incumbent who’s been there for 20 years, and we’re so grateful that you stepped in as a leader and took on that task. What were some of the highlights of running, what were some of the things that gave you energy?

EG: I think the highlight was just running and learning all the things that I did within that short time of  three to four months of my campaign. And really stepping out of my comfort zone. I tend to love to be around like-minded people, and all these organizations and what they stand for. But seeing all the other people, and having those conversations… that really opened my eyes, and challenged me in a way too. One person in conversation had told me I would only get in that seat “if they allowed me to”. I was like, “Who is they?” Having an incumbent for that long, and already knowing that he’s embedded – that’s a challenge.

KL: So looking back at some of this, what would you do differently next time?

EG: Really getting that team together probably even before you do anything. Set up the whole structure on how to start getting contributions, that was a huge challenge. Because of the short timing of the primaries, I know I didn’t receive all of the questionnaires that I should have. So really having a strategic plan. My campaign manager had one, but again, in that short time, and it wasn’t really followed because there were a lot of things we had to do. Like we only planned for one fundraiser but we did three, right, and all those were like short turnarounds. So another part of the challenges was having the fundraising, and how to bring funds. To buy the list of people so we could do the door knocking, that came really late in the campaign because we finally had got enough money. So we signed up for the phone banking, for door knocking, but we just did not have the people. We did some emails, we did a lot of social media, people DM’d to get signs. And then myself and just a few people, we put them out near freeways and what not.

KL: So was there anything that was really surprising that came up, that you were like, “Oh my gosh I didn’t know that I needed to know this!”?

KL: Is there anything you think organizations can do better to support candidates like you in the future?

EG: I think it would just be to get more involved in counties. That seat is just – it’s so important. Those supervisor’s seats are so important. So just educating folks that those county seats are so important. And to get people to run for those seats, all of them. That would change a lot. Also, announcing when people are running. I don’t think I announced it properly, that I was running, because still that day, some people were like, “I didn’t even know you were running.” So for the community it would be good for people to know and to get that name out there.

And also to organizations and funders and foundations – I’d say pay attention to Black people. It’s not taking away from anybody else. One of the important things for me is to pull Black people out of the “people of color”, right? So if it’s speaking for Black votes, it’s not going to be a table full of white men that’s gonna do that. So that’s another reason why it’s highly important to be a part of this. The people that actually teach, especially young ones, they’re the ones who should be sitting in seats.

And when I’m talking about advocating for Black folks, it’s really for people to understand the history of descendants of slaves and slavery, because our whole work in social justice is about how this country is built. And so if you are in these positions like my opponent and you’re voting to increase the staffing and funding for sheriffs, then we all see what side you’re on. Again, we wouldn’t be doing this work if everything’s fixed. Just because you are a person of color doesn’t mean you have a social justice analysis. There’re plenty of corporate Democrats and plenty of people who will side with corporations over people. There’s plenty of people on the wrong side. The wrong side of justice, let’s say.

KL: Ok so last question, what advice would you give to people who are thinking about running for office? Give your words of wisdom that you want to share with folks.

EG: Just do it. Don’t be scared. Because we don’t have time. Our time is the time that we’re here now. Some people felt like I wasn’t ready to run, and I’m like, “It’s not about me!” Because I’m not going to be doing this by myself, right, it’s gonna be us. We always have things to learn, right? So the more time we’re like, “Well I just want to learn this some more”… just do it. We need to do it. And constantly challenge these systems and the people in them.

This interview has been edited for length and clarity.

Sally Lieber – Board of Equalization District 2

Alameda County District Attorney
District Attorneys hold one of the most critical and powerful roles in our legal system as they hold the power on who to sentence and how harsh that s…
Pattern Error: href not set.