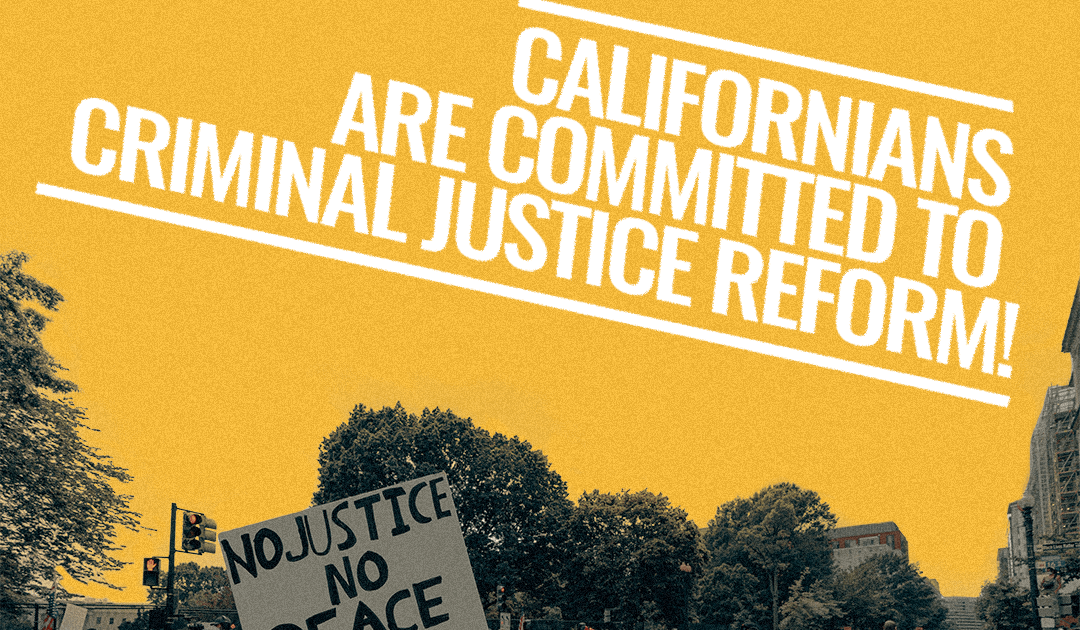 SAN FRANCISCO – Yesterday’s primary election results reflect California’s ongoing movement to reform the broken criminal justice system; we celebrate the several wins and promising outcomes powered by voters, and we learn from the losses and setbacks funded by law enforcement groups and right wing donors. The historic number of contested district attorney and sheriff races this year are a strong sign of momentum, and we will continue this political fight for and beyond the November 8 general election. Election results are still coming in, it’s too early to call many races but there’s enough information regarding many progressive reformers’ campaigns for us to know that Californians remain committed to criminal justice reforms.

Courage California congratulates Contra Costa District Attorney Diana Becton for handily winning her re-election, Attorney General Rob Bonta for securing clear frontrunner status in his election, and Pamela Price for moving onto the top-two general election in November. We also want to commend Alana Mathews for running a campaign that reflects California’s future not past, as well as Pete Hardin, Sajid Khan, and Judge Burke Strunsky for challenging conservative incumbents who have records of failing our communities and building their own political power. Notably, three Latina sheriff candidates running on reform platforms – Yesenia Sanchez in Alameda County, Christina Corpus in San Mateo County, and Tina Nieto in Monterey County – are leading in their races against incumbents, and Los Angeles Sheriff Alex Villanueva is well under 50% and will face a November run-off.

”The movement to keep all communities safe is broad and based on decades of wins in the streets and at the ballot box. The races and results of this June 7 primary election show how this movement is growing and gaining traction, including with Attorney General Rob Bonta securing a resounding majority of the vote in his race, Contra Costa District Attorney Diana Becton’s decisive re-election, and with more district attorney and sheriff candidates dedicated to reform running than in previous elections. It takes courage to run for office knowing that you are fighting the status quo of mass incarceration and unchecked police authority, with all the power and money that goes into protecting those systems that harm our communities each day.” Irene Kao, Executive Director of Courage California.

We are disappointed by the recall of San Francisco District Attorney Chesa Boudin, who was held solely responsible for longstanding problems in San Francisco. San Francisco residents voted overwhelmingly in favor of progressive Attorney General Rob Bonta and have voted for the very reforms that Boudin championed in his two years in office, and we call on Mayor London Breed to appoint a new district attorney who is committed to community safety and not the over-criminalization of our community.

Statewide, California voters have also consistently supported changes to our system to end over-policing and over-incarceration, hold police accountable for their actions, restore civil rights to formerly incarcerated people, and invest in a broader and more comprehensive safety net – solutions that have proven to keep us safe.

We’ll use this moment, as community based groups, to learn and reaffirm our commitment to elect reformers and hold elected leaders accountable. Frontline groups and leaders know what the people want and understand the nuances associated with yesterday’s outcomes and are available for additional comments.

“We are deeply disappointed by the news that Proposition H has passed and that our democratically elected DA Chesa Boudin will be recalled. Over the last several months, Republican billionaires, real estate investors, and police officer associations poured $7.2 million into this recall. They spread disinformation, played on people’s fears, and scapegoated DA Boudin for the city’s challenges. We’ve seen this playbook in 2016 when Trump was elected, and we’re saddened that it worked during an extremely low turnout election with only 25% of voters casting ballots. But we at SF Rising Action Fund know this fight doesn’t end here, not by a long shot.

“We know right-wing pundits and recall proponents will spin this win as a victory against reform efforts. But San Francisco’s progressive values are very much alive in the working-class communities we organize. We call on Mayor London Breed to appoint a district attorney who will seek true justice for all; hold police accountable when they break the law; and uphold public safety that supports victims as well as root cause solutions. San Franciscans deserve a district attorney who will work to eliminate inequities in our criminal legal system.” Emily Lee, Director at SF Rising Action Fund (link to full statement, emily@sanfranciscorising.org)

“This movement is in its infancy, but it’s growing, as across the state and country more reform-minded DA’s ran this year than ever before,” said Cristine Soto DeBerry, Founder and Executive Director of the Prosecutors Alliance. “While San Francisco lost a champion, the flag-bearer for the state’s tough-on-crime movement didn’t even advance to the general election–with Californians overwhelmingly electing a reform-minded Attorney General.

“Where reform-minded prosecutors lost they were heavily outspent by special interests and law enforcement unions seeking to purchase a blind eye towards officer misconduct. DA Chesa Boudin made progress for San Francisco, but his efforts to enhance safety and justice were cut short by conservative mega donors and a campaign that peddled fear and misinformation. With overall crime and homelessness having fallen since DA Boudin assumed office, the success of Prop H demonstrates the danger of well-funded recall and misinformation campaigns–a new staple of America’s conservative movement–rather than objective implications for safety caused by reform or reformers.

“The modern approach taken by reform-minded prosecutors will continue to gain traction because it is demonstrably safer, as reform reduces recidivism, produces fewer victims in the long term, is significantly less expensive for taxpayers, and leads to fewer racial disparities. To achieve those aims tomorrow, the Prosecutors Alliance remains steadfast in its support of prosecutors, victim advocates and candidates for office committed to smart, safe, and modern solutions that advance not just public safety, but human dignity and community well-being.” (cristine@prosecutorsalliance.org)

“Contra Costa voters turned out and confirmed District Attorney Diana Becton’s historical leadership by re-electing her to office. Becton has championed partnerships and approaches to justice that work in keeping Contra Costa communities safe. She targets gang crime and organized theft, funds diversion programs and other alternatives to mass incarceration, and she secured the county’s first conviction of an officer for an on-duty fatal shooting in fall 2021. Lift Up Contra Costa Action is excited to continue to work with DA Becton as she deepens her community safety, justice, and accountability efforts.” James Herard of Lift Up Contra Costa Action (​​jherard@liftupcocoaction.org)

“Riverside County residents have shown this election cycle that they would like a responsible approach to Criminal Justice. One that prioritizes rehabilitation, reform, and investment in communities. Mike Hestrin barely won his re-election with just 53% of the vote, it is clear his tough on crime approach is outdated. Without a doubt if this election were held in November, when over 65% of the population participates vs less than 25% who participated yesterday, Mike Hestrin would not be the elected District Attorney of Riverside County. Inland Empire United, and its partners, will continue to hold Mike Hestrin and Chad Bianco accountable to all Riverside County residents, not just the few in power.” Michael Gomez Daly of Inland Empire United (michael@ieunited.org)

“Law enforcement spent over $90,000 to back the incumbent DA, Jeff Rosen, whose policies remain out of step with the progressive values of Santa Clara County. Time and time again, county voters have supported statewide criminal justice reform measures, while Rosen sought the death penalty for an innocent man, protected officers who sexually harassed women, and continues to charge and punish some 16- and 17-year-olds as adults. Bay Rising Action will continue to support progressive prosecutors who represent their communities’ values and do the best job of seeking justice and addressing the root causes of crime.” Kimi Lee, Executive Director of Bay Rising Action (Kimi@bayrising.org)

“Early results show Pamela Price with a strong lead at 40% and her closest opponent with 31% of the votes. A civil rights attorney, Price knows that our current legal system is dysfunctional and that it disproportionately targets Black and Brown communities. Every other candidate for DA in Alameda County is a ‘law and order’ candidate, while Pamela Price is committed to pushing away from the establishment and our addiction to incarceration. Her outspoken leadership in support of alternatives to incarceration pushed every candidate’s platform to the left, resulting in more conversations about diversion programs, ending the practice of charging youth as adults, and investing in community. As our next DA, we expect Pamela Price to continue to build on her commitment to work with organizers and community members who have the knowledge and expertise to make the changes we need in the county carceral system. Alameda County deserves a DA like Price who understands that safety does not come from locking people away, but from investing in the community.”

“Safety is someone there for us when we’re in crisis, food in our bellies, and a roof over our heads – not a jail cell. We could not in good conscience make an endorsement for the sheriff’s office [in Alameda County] because the sheriff continues to take resources from our communities to criminalize and abuse us, instead of caring for us. In this institution, reform measures need to be swift – and lean towards abolition, yet the candidates have expressed commitment to making only incremental changes. We cannot afford to maintain this system as lives are on the line. In addition, the sheriff’s office, which supervises Santa Rita Jail, has looked the other way as officers repeatedly tortured and killed people they locked up in the jail. The U.S. Department of Justice recently released a damning report that details the sheriff’s documented human rights abuses and misconduct. The decisions coming out of the sheriff’s office especially affect unincorporated communities in Alameda County, because the sheriff steps in when there is no local police patrol. While we abstained from supporting anyone in this position, we will continue to work to shift Alameda County resources back to local public services that help community members put food on the table, stay healthy, and keep a roof over our heads – things that truly keep us safe.” Beth Gunston, Strategic Partnerships Director of Oakland Rising Action (beth@oaklandrisingaction.org)

Courage California, and our partners, remain dedicated to supporting and electing candidates who will actively champion progressive issues now, through, and beyond the November 8 general election.

Courage California, formerly Courage Campaign, works to unite communities organizing for progressive change, fight the forces of corruption, and hold our representatives to account in order to ensure that California’s elected officials act with courage. Our community of members envision California as a model of progressive, equitable, and truly representative democracy that sets the standard for our country.