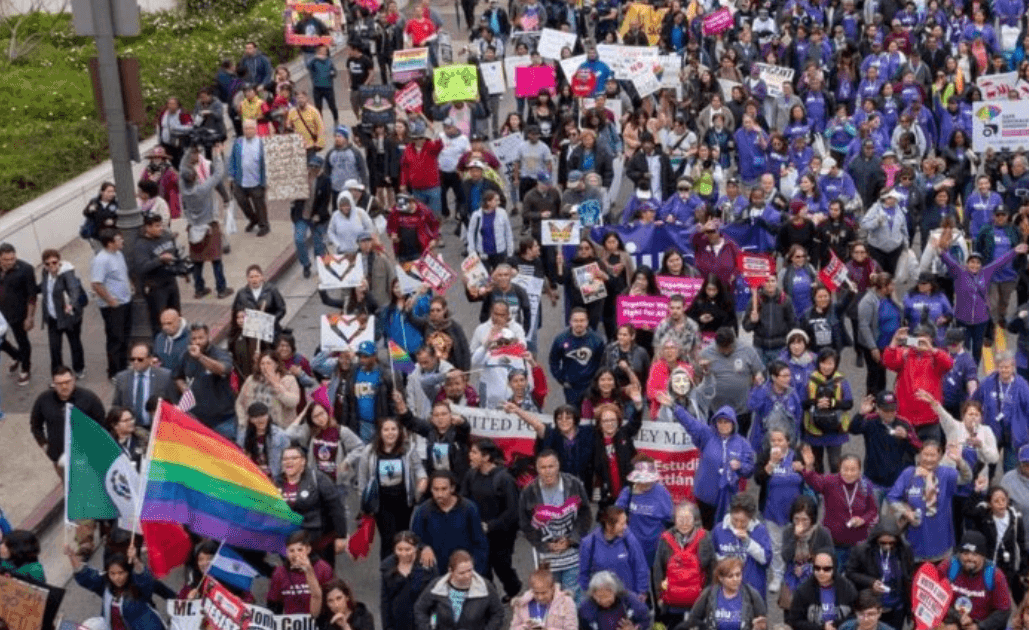 Turnout Key to Beat the Right in California Recall

Mass mobilizations and deep electoral organizing turned California blue. Now communities are stepping up to defend their gains with a huge “no” vote in the election to recall Democratic Gov. Gavin Newsom. Photo of May Day 2018 in Los Angeles from CHIRLA. The lead banner reads: “California: Fearless, United” in English and Spanish.

This article was originally posted on Organizing Upgrade.

By Irene Rojas-Carroll and Marcy Rein

It seemed like a nuisance election a few weeks ago. Now the vote on whether to recall California Gov. Gavin Newsom looms as a more serious threat to the past 20 years of democratic gains in the state. The recall spotlights some sides of California politics that progressives need to keep reckoning with – and puts an urgent and unglamorous task in our path for the next month.

“Everything is at stake,” said Irene Kao, executive director of Courage California. Noting that a successful recall would give California a Republican governor, Kao said, “It will threaten any progressive gains made on the environment, immigration, criminal justice reform, and many other issues. Additionally, a Republican governor would make appointments in the case of any statewide office vacancies, including a Senate seat that would turn control of the Senate to Republicans.”

The 2003 recall, which booted Democratic Gov. Gray Davis and elected Gov. Arnold Schwarzenegger, offers a cautionary tale. Gov. Schwarzenegger made massive cuts to health care, education and social services in the name of balancing the budget. He vetoed stricter pollution controls and pro-worker bills, like the extension of overtime pay for farmworkers.

Mass media have cast the initiators of this year’s recall as a motley crew of Q-Anons, anti-vaxxers and the like, and foregrounded Newsom’s handling of the pandemic. But the language of the recall petition itself reflects the racist, anti-immigrant politics that have run long run amok in California—as in the anti-Chinese riots and the Modoc Wars of the 1870s. The petition says, for example, “Laws he [Newsom] has endorsed favor foreign nationals in our country illegally over that of our own citizens.”

These attacks spurred mass mobilizations, followed by deep electoral organizing in the targeted communities. California has had a Democratic governor and legislature for 10 years. “But we’re a much more purple state than people realize,” said Bay Rising Action Executive Director Kimi Lee. “We have pockets of deep, deep blue in the Bay Area, for instance, but if you go even 10 miles inland you start finding more Trump voters. And there are more people registered ‘declined to state’ than Republican,” she said.

That ups the threat built into the nature of the recall election. Small number of voters can oust an official who was elected with much broader support. Signatures from a sliver of the electorate – 12% of the people who voted in the election that brought the governor to office – are needed to file a recall petition. The election will take place at an off-time – mail-in balloting goes from August 16th to September 14th. There will be some voting centers where people can cast votes in person, but no go-to-the-precincts Election Day. The right is far more excited about this election; Courage California calls it an “enthusiasm gap.”

The attempt to recall Gov. Newsom is another manifestation of the disruptive, minority-rule politics being practiced by the right wing. Other progressive elected officials are facing recalls as well – notably San Francisco District Attorney Chesa Boudin, Los Angeles District Attorney George Gascón, and Riverside City Council member Gaby Placencia. These are the same politics on display in the spate of voter suppression laws being passed around the country, the flagrant gerrymandering of congressional districts, and denial of the presidential election results.

“The recall’s biggest supporters are the same people who want to take away our right to vote, turn back the clock on civil rights, deny climate change is real and put the massive profits of wealthy corporate billionaires over working people,” said Jung Hee Choi, Deputy Director of PowerCA Action.

Courage California and the Million Voters Project Action Fund are anchoring a loose statewide coalition that’s mobilizing in defense of the governor, adding their efforts to those of the California Democratic Party and the governor himself. The Million Voters Project Action Fund connects the political action arms of seven grassroots groups organizing young people, working people, immigrants and communities of color across the state; they include PowerCA Action, the Coalition for Humane Immigrant Rights of California (CHIRLA) Action Fund, and AAPIs For Civic Empowerment Education Fund.

The California Labor Federation is also scaffolding vigorous canvassing and phone banking efforts by labor councils around the state.

KEEP THE ROAD TO PROGRESS OPEN

“Newsom has always been a moderate Democrat, but we’ve seen some important gains under his administration and the recall puts our communities at serious risk,” Lee said. During his term, Newsom has signed off on legislation expanding Medi-Cal protections to undocumented immigrants, putting an eviction moratorium in place during the COVID-19 pandemic, and supplementing federal pandemic unemployment benefits. Neither these nor many other progressive bills would be safe from the veto pen of a Republican governor. Newsom also was the first governor to issue a public health emergency order in 2020 in response to the pandemic, and has continued to implement aggressive public health measures. And during the 2020 election cycle, he ordered that absentee ballots be mailed to all Californians.

As in last year’s presidential election, we need to pull together and show up for a moderate Democrat so we can keep organizing for the changes our communities so badly need. “At stake is not just whether Governor Newsom keeps his job, but whether we keep making progress toward a California that cares for all of us no matter what we look like or where we came from,” said Choi. “By voting NO on the recall we are saying we want to keep expanding health care for all, expand rent protections so people can keep a roof over their heads, and keep protecting essential workers and immigrants.”

The Republicans are pinning their hopes in part on the fractures in the Democrats’ base. Turning out as much of that base as possible will be the key to keeping the governor in office.

Act now to make sure your vote counts and our voices are heard on September 14: